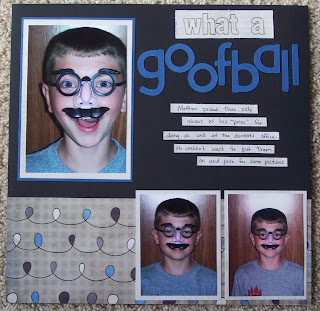 Kathi over at HSS posted a challenge to use your silly photos on a layout. I searched and searched and finally decided on these pictures of Matthew. He got these silly glasses when he went to the dentist as a prize for being so good. He had so much fun showing everyone what he looked like and posing for some pictures. That was over a year ago and we still have the glasses and the nose - just the moustache is missing. Shane even was seen wearing them around the house a couple of weeks ago. I guess I should have taken a picture of him and added it to the layout!
Posted by Lori at 4:58 PM No comments: 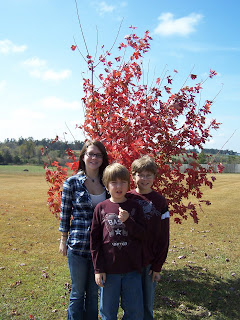 Here is a picture of the kids in front of our maple tree in the front yard. We took the picture a week ago Sunday and I'm glad we did because this week the leaves are all gone. The weather has been so so cold. The normal highs are supposed to be around 70 and all last week the highs were in the 40's with rain. Just plain miserable. I'm ready for the average temp. to return. Makes me wonder what kind of a winter we are going to have. Everybody tells me that the Farmers Almanac says it's going to be colder and wetter than normal. Nobody seems to know if the "wet" means rain or snow. So long as it's not ice - I'll be okay! And then there's the wooly worm forecast. If you go by it, winter is supposed to have a cold start, a mild middle, and a cold end. (That's when the wooly worm is black on both ends and brown in the middle. Jenny says they have seen a lot of white wooly worms...don't even want to guess as to what that means!!) I guess we'll have to see whose right!
Posted by Lori at 5:01 PM No comments:

What is wrong with me?!

I just can't seem to find the time to get on here! Well, that and lovely dial up internet service makes it take so long to upload a picture. (Insert mad face here!!) Not much has been going on so I don't have a lot to catch up on. Abby's taken almost all of her mid term exams for this first semester. Of course she stressed and worried, but she did fine. She was really worried about her Bio exam and found out she made 104% on it. She didn't even know there was extra credit on it! She worries so much but that is why she is such a good student.
Posted by Lori at 4:52 PM No comments: