No caffeine + the mention of school = a bad day! 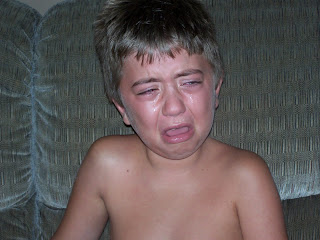 Okay, I'll be the first to admit that Shane is addicted to soda. If Shane had his way he would drink soda from the time he gets up of a morning until he goes to bed at night.And he wants the real stuff! No diet or caffeine free for this guy. We have tried really hard this summer to cut back on his soda intake. His dentist has told us that he has a bit of acid reflux - (Yikes!) and he got to where he was belching and sounding like he was going to throw up in the process (I'm sure thanks to the acid reflux) so our mission this summer has been to cut down to only one a day and eventually none. Abby has done really well with flat out telling him no. And he has gotten to where he will ask for milk or water (that's definitely the last resort for him!) instead of soda. Well let me tell you, we found out late Sunday morning just how cranky this guy can be when he's not had his soda and you mention - heaven forbid - the word school. I have never seen such a sight! We gave him a little bit of soda, he headed to his room and came out a completely different, happy boy. It's always an adventure with Shane!
Posted by Lori at 9:00 PM 1 comment:

Scott's Birthday and the fair 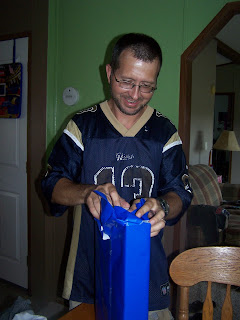 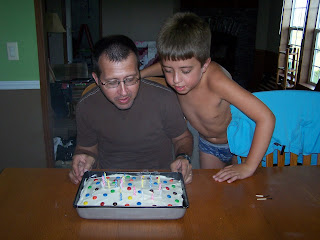 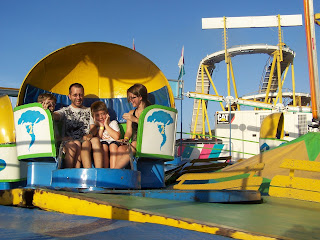 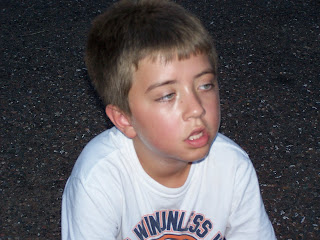 We decided for Scott's birthday we would once again go to the Ozark Empire Fair. We went last year and had such a good time and we decided that may just become a tradition. Since Scott has been working so much overtime and finally had a Saturday off, we thought it would be a great time for a little getaway. Friday when he got home from work we packed up and headed to Springfield. We decided to stay in the night in Springfield since we wanted to do a little shopping and knew we wouldn't have time to get it all in in a night. We found a hotel, went out to eat, then headed over to the fairgrounds. It was the first night of the fair and it really wasn't as busy as what we expected. We headed right for the roller coaster - one of Shane's favorites - and the fun started. We all rode the roller coaster and the ferris wheel, but when it came to the spinning rides, Shawn and I had to opt out. This was the first year Shane rode on the Tilt-a-Whirl - he loved it -and he tried out the Himalayan - he liked this one at first, but as the ride got faster and kept going and going...well lets just say he won't be riding that one again! I think we were lucky he didn't throw up after (or during) that one! It was a very fun night and I hope we get to do it again next year.
After the fair we went back to the hotel and crashed. The room was a little hot and stuffy when we first got there, so we turned the air on full blast and went to bed. By morning we were all freezing! We all got tickled when Shawn said he thought he could shoot ice cubes out of his toes -that's how cold it felt in there! While I was getting ready, Scott and the kids headed out to the pool for a quick swim. After that it was off to breakfast and a day of shopping. Scott says it was the best birthday that he's had in awhile. I know we all had a lot of fun, made a lot of memories, and I can't wait to do it again next year!
Posted by Lori at 7:05 AM 1 comment:

Scrap Attack Scrapbooking! It all starts Aug. 13 and goes through the 15th. I am sure it will be a weekend filled with great challenges and a lot of inspiration! Here's how you get there:http://www.scrapattackscrapbooking.com/messageboard.
Posted by Lori at 6:41 AM No comments: