This week's card challenge over at Scrappin' N Chattin' is to use at least 3 brads on your card. When I saw this sketch from Clean and Simple Stamping, I knew that it would be perfect for this challenge. 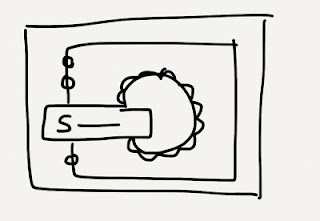 I used some papers from the My Mind's Eye - Miss Caroline Dilly Dally 6x6 paper pad, a doily from Martha Stewart, and the sentiment is from Hero Arts. Another quick and easy card, and I love the way it turned out! It will be finding it's way to someone special very soon! 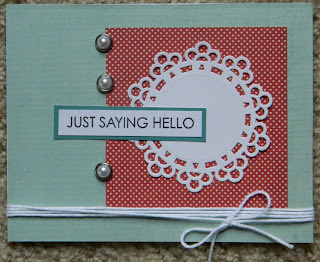 I have a couple more ideas for cards using this sketch, so you may be seeing it again soon!
Posted by Lori at 9:50 AM 2 comments: 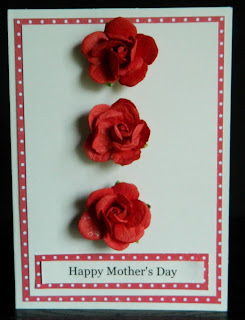 For this week's card challenge over at Scrappin' N Chattin' we were to make a Mother's Day card. I had just received a package from my good friend Rhoda that had these pretty flowers in it and I was anxious to use them on something. So, when I saw this sketch from The Sampler Kit Club , I knew exactly what I was going to do. 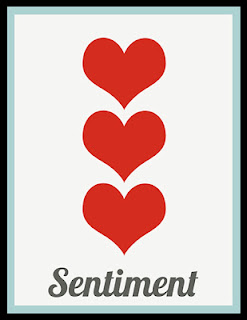 I love how it turned out and I am so happy to have a card made with time to spare!
Posted by Lori at 10:21 AM 2 comments: 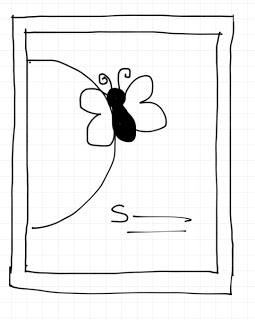 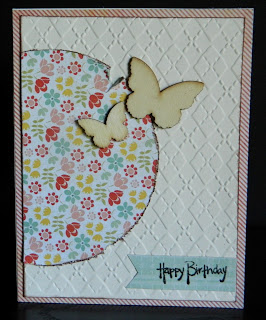 This week's challenge for the 52 week card challenge over at Scrappin'-N-Chattin' was embossing. I am a little embarrassed to admit that I have had this argyle embossing folder for years and this is the first time I have used it. Thanks to Rhoda's embossing challenge it finally made it out of the package. I used this week's sketch from Clean and Simple Stamping (I love their sketches!) and the card came together really quickly. I used up some papers from the My Mind's Eye - The Sweetest Thing Tangerine 6x6 pad that I have been hoarding for some time now - it's just so hard to cut into that pretty paper -and a couple of wood pieces to finish it off.
Thanks to a great challenge and a fun sketch, I now have a pretty birthday card for my sister's birthday next week!
Posted by Lori at 1:57 PM 2 comments: 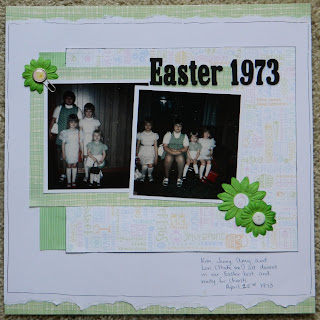 Ah - these were the good ol' days! Me and my sisters all dressed up in our Easter best and ready for church. I love looking back at old photos of us girls. We didn't have a lot of money growing up and Mom made a lot of our clothes (she was quite the seamstress!) - and it's quite possible she made one or more of these dresses. But we never wanted for anything...things were so much simpler then! I love that each of us has our own little purse to go with our outfit - the perfect finishing touch to that Easter outfit!
Posted by Lori at 12:58 PM No comments: 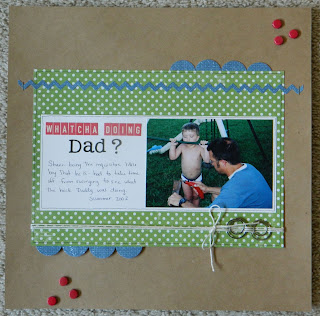 Here's another layout using an older photo of Shane. I just love looking back and seeing those chubby little arms and that sweet little face peeking over the bar of the swing set. It's kind of hard to believe that my almost six foot tall  teenager was ever this little!

For this layout I used sketch #29 from the My Scraps & More birthday sketch-a-thon that they had going on last month. The challenge, along with the sketch, was to use a punch or punches on your layout. I used a circle punch to create the scallops on the page and my border punch for the zigzag piece along the top. I am also entering this in the Frosted Designs fabulous Friday challenge to use scallops on your page. Today is the last day to get it entered - nothing like waiting until the last minute!
Posted by Lori at 8:26 AM 3 comments:

I can't believe that this was the first year that we did not color eggs, but the last couple of years it was really only Abby doing it by herself, so I thought it was time to stop. Abby was disappointed, so who knows - we may color eggs next year. Even though we didn't color eggs, we did have some fun when it came to taking pictures - and Shane was actually in a picture taking mood, and that is rare! 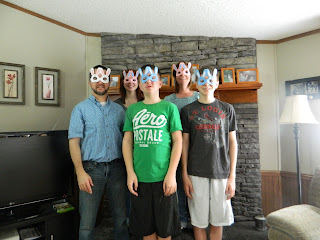 The last few holidays I have found some props for us to take our family photo with. We've worn Santa hats, shamrock glasses and green moustaches for St. Patty's day, and this past Christmas we had elf hats for the boys and reindeer antlers for the girls. Well, when I found these bunny masks I knew we had to wear them for Easter. Poor Shane's was so tight on his face, but he was a trooper and kept it on until we got the picture. 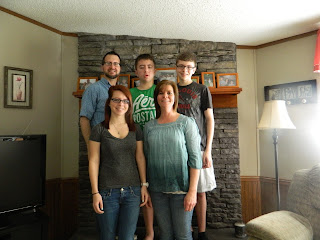 Of course I have to get a good family photo of all of us together.

And then we decided to do our version of awkward family photos - starting with this one of the kids piled on top of each other. Yep - the youngest and biggest is holding all the weight, but he doesn't mind! 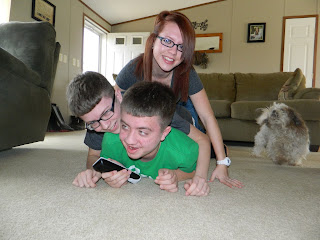 For this one we went tallest to smallest - peeking out from behind the person in front. I really didn't expect it to turn out so good, but I think it is my favorite of the group! 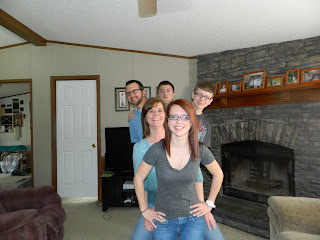 The next two photos are of us trying to do an old time photo with no smiles. It was so  hard trying not to smile when all you wanted to do was laugh - but we got the look we wanted. 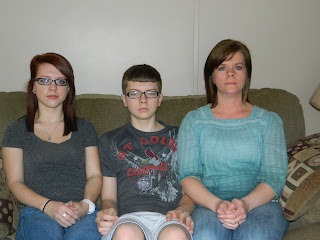 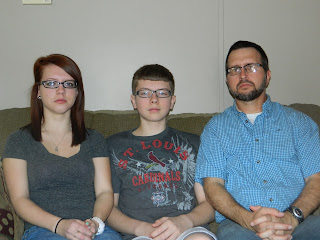 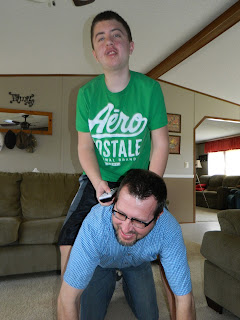 Once again trying with all our might to get Shane in the right position. 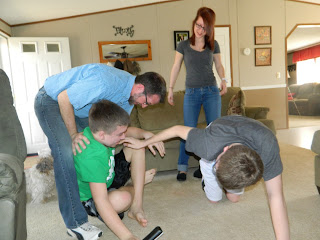 Okay - so he's not on his hands and knees, but it was close enough that Abby could climb on top and I got the picture. 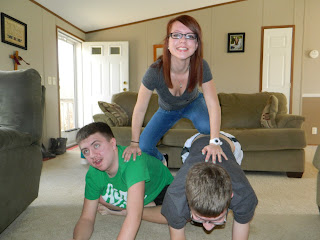 Abby and I just knew we could hold Matthew up while he was in a posed postion, but dang, he's gotten big! When did that happen?! Our first attempt ended up with us dropping him - yep dropping him on the floor. 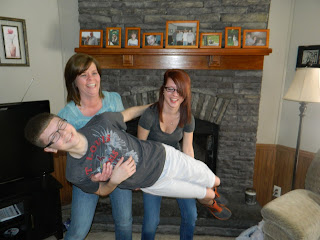 After that we decided he could just lay across our laps in his posed position. That worked much better. 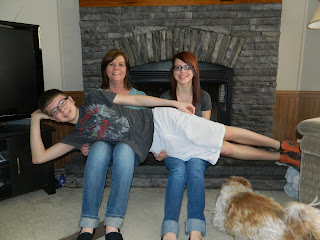 After that we headed to Betty and Duane's for a wonderful meal with the family. It was pretty enough outside that the boys went out and played basketball for a while. I am so ready for warm, sunny days! On the way home we stopped at Dairy Queen and got some ice cream. Shane is not usually a big ice cream eater and it always has to be an ice cream cone. I even gave him a choice between french fries or and ice cream cone and he still picked an ice cream cone, so I knew he really wanted one. We got so tickled at him and his ice cream cone. He did enjoy it! 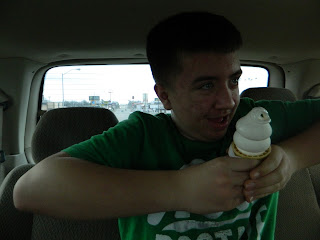 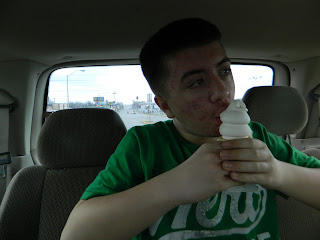 I couldn't have asked for a better day with my family. It was the best!
Posted by Lori at 1:14 PM No comments: