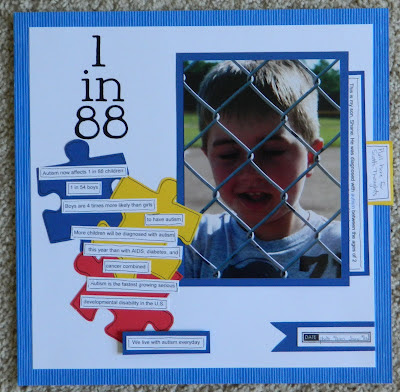 Stacey has another sketch class going on over at Inspired to Scrap this month and of course I had to take it - she always has such great sketches! This layout is my take on sketch #7. I figured since April is Autism Awareness month, that it was about time I made a layout about it. The strips on the puzzle pieces are statistics about autism.

I made this layout after Scott had posted a picture of Shane and his thoughts on Shane and autism on Facebook. He was able to say what I struggle to say about autism, so, the journaling behind the picture is from Scott.
This is what he had to say:
This is my son, Shane. He was diagnosed with autism between the ages of 2 and 3. He may never have a best friend or talk to his friends about how gross girls are in the first grade. He will probably never have a first kiss or a high school sweetheart. He will probably never proudly drive his new car or truck to school to show it off. He will probably never ask a girl to the prom or slow dance with the girl he always had a crush on. He will probably never get married or know the joy and pride of having children. He will probably never hit the winning basket or homerun in a ballgame. Shane has autism and may never do these things, but I know that there is an incredible boy inside held hostage by his autism. Unable to express himself or show his true potential. I say he MAY never do these things because I hope and pray daily that they will find the cause and cure for autism.

Stayed tuned because I am determined to get my thoughts and feelings on autism and how it affects our family down on paper.