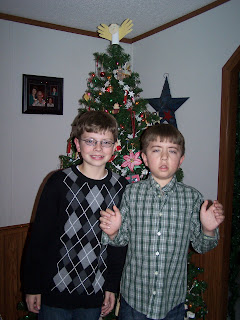 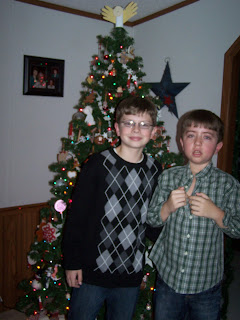 No, definitely December weekly's for me! Okay...let's see what all has gone on since last week. The boys had their Christmas concert on Tuesday. Well, I guess I should say Matthew had his concert on Tuesday. For the first time in 3 years their concert was on the same night and lo and behold Shane started not feeling good on Monday. I knew if I sent him to school I would probably be going and picking him up early, so he stayed home, which meant he got to watch the concert instead of being in it. I don't think it bothered him a bit! The concert was really good this year. They hardly ever sing traditional Christmas songs -and I wish they would - but the songs they did sing were really nice. I tried to get a picture of Shane and Matthew in front of the Christmas tree and these were the best I could get. Shane was not in a picture taking mood and Matthew kept trying not to blink which made him have crazy big eyes. Maybe we'll try the picture thing again before the big day.

This is the weekend that Abby doen't get to come home. She has a final in her political science class tomorrow afternoon. At least she is done with the semester on Wednesday. She told me tonight that finals hadn't been nearly as stressful as she thought they would be. That's a good thing! She always worries and stresses so much more than is needed! It will be so nice to have her home with us for a few weeks!
Posted by Lori at 7:30 PM