Good Sunday morning! We are smack dab in the middle of a beautiful 3 day weekend. This is the first time in a long time that the boys actually get Martin Luther King Day off of school. They're usually using it for a snow make-up day, but so far this winter we have been lucky and haven't had a single snow day. At least not yet!

This week's challenge at Lasting Memories is to scrap about a life's lesson. (I apologize in advance - this is going to be a little long.) 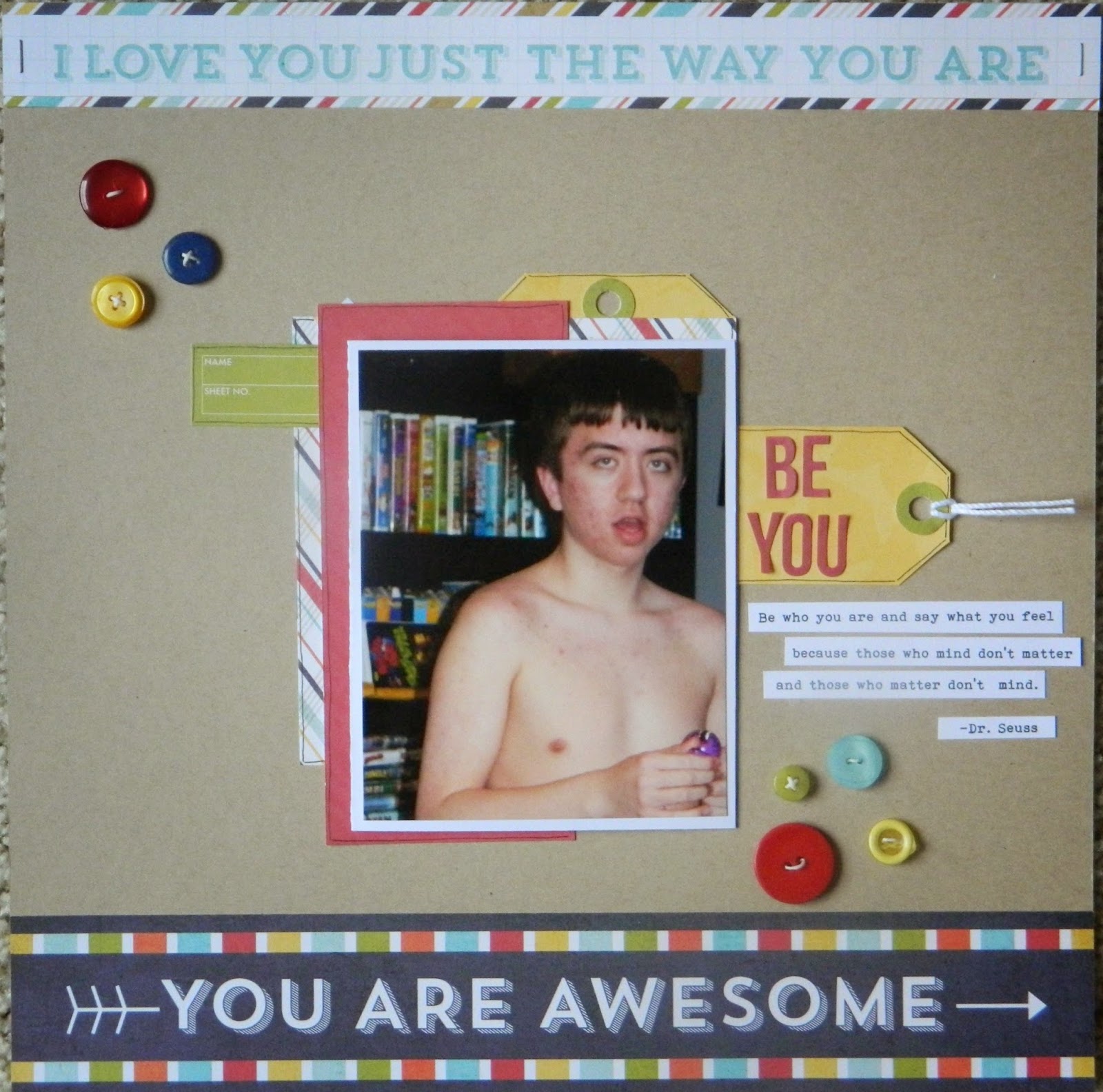 I have to be honest - this really was a challenge for me. I struggle with scrapping life lessons. Therefore, I shy away from them. Sure, I have had lots of life lessons. Being the Mom of a special needs child - well I feel like I learn a little something every day. I guess I have a hard time expressing my feelings and then putting it out there for the world to see, but here goes!

This layout is really about a combination of  life lessons. First off I want Shane to know that it's all right to be different. Like the Dr. Seuss quote days - Be who you are and say what you feel because those who mind don't matter and those who matter don't mind. Heck, this is a lesson I've had to learn myself. I've always been a people pleaser and it used to be hard to go out in public and see the stares whenever Shane would have a meltdown. Things that we are used to at home, like the noises that he makes, or the bouncing and hand flapping are a surprise to the general public. I get that and it's fine. It just took me a while to get to the point of accepting it and moving on.

Which brings me to my next life lesson. Don't judge a book by it's cover. It's hard to really get to know someone when they have a communication disorder. Shane can communicate, but a lot of what he says is just repeating what he has heard or lines from a movie. Spontaneous speech with him is almost non existent. We can't ask him what he did at school and get a reply. He can get his point across, but to someone that doesn't really know him, it's almost impossible to figure out what he says/means.

I wish, just once, that everybody could see what a great kid that Shane is. He is a typical teenage boy that loves video games, watching movies, playing basketball, and the occasional rough housing - usually with his cousin who is big enough to handle him!

So, the next time you're out shopping and see a kid having a melt down, I hope you don't automatically think "What a spoiled brat!". Yes - 9 times out of 10 it is, but it just might be that one kid that's having sensory overload!

I am also entering this layout in Use Your Stuff's challenge #168 - to use buttons on your project. I still had my button box out on my desk from last week's layout, and thought I'd use a few more on this one!


Be sure to stop by Lasting Memories and see what the rest of design team has done with the challenge, and I hope to see a layout from you, too!

Thanks so much for stopping by! Have a great week!
Posted by Lori at 6:30 AM