What's gonna happen? Two posts in two days? We've had a lot going on and I am actually taking the time to get it down. 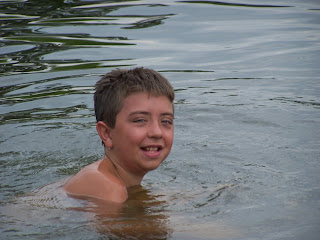 We went camping again at Pomme de Terre lake on the 5th and 6th. I know, it's not a long time camping, but with Shane it's about all we can manage. And really two days of being away from air conditioning, beds, and all the comforts of home is long enough. That and the rain didn't help matters any. We got down to the lake right after noon and the campsite was already empty. Scott and I decided to set up camp while Abby, Shawn, Matthew, and Shane headed to the lake to swim. I love our campsite being so close to the lake - just a short walk and you're there! The lake was pretty crowded when we first got there, but cleared out pretty quick. 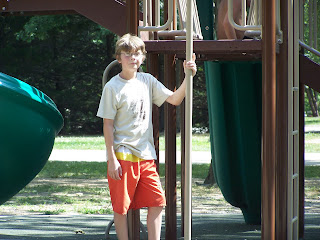 We did get rained on Monday evening. It didn't last long, but it didn't take long for Shane to decide he was ready for home either. He is definitely not an outdoor person unless he is in the water. Shawn, Abby, and Matthew wanted to go swimming while it poured down rain. Since it wasn't lightning or thundering we let them go. They stayed down in the water the whole time it rained. Matthew thought it was really cool going underwater and listening to the rain hit the water. Turns out Abby spent most of the time under the shelter house roof! 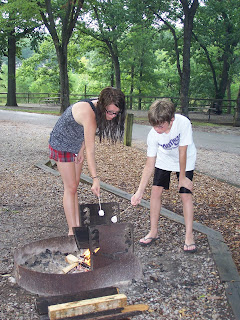 That evening we enjoyed smores and playing cards. It didn't take Shane long to fall asleep. He had had a long day filled with swimming and playing on the playground. That along with boredom on his part made for a fairly early evening. The air mattress the kids slept on lost air during the night and by morning they were pretty much sleeping on the ground. I don't think any of them got a lot of sleep. Even Matthew, who can sleep through just about anything, wasn't happy when he got up! The birds woke me up about 4 a.m. with their singing. It sounded beautiful, but I could have used a couple more hours of sleep! We were all up and having breakfast by 6:30 and back down to the lake for an early morning swim soon thereafter. Once again we had the lake to ourselves that early. Well except for the geese. They were exploring the beach again. 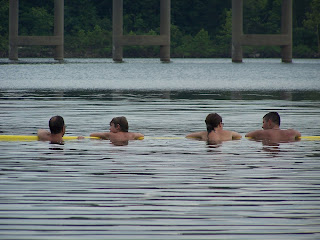 Abby found a few more rocks to add to her collection from last year. Matthew stuck to Shawn like glue the whole time. I don't think he ever got far from him the whole time. The clouds started rolling in again and we decided it was time to head home. Just in time too. As we were pulling out of the campground it was starting to rain. 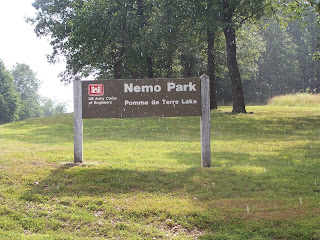 It was another fun camping trip and I'm sure we'll do it again next year. Maybe we'll push our luck and try for 3 days!
Posted by Lori at 10:52 AM