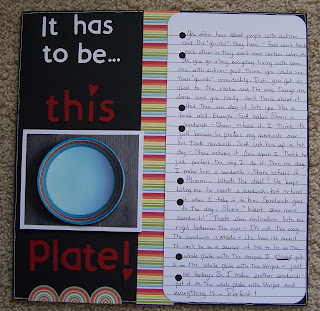 Here is my layout for week 2 of my 52 week challenge. I decided to do a layout about Shane's plate. The story for this was really long, but it needed to be told. I know that years from now it will be hard to remember that Shane had to have this plate...or maybe not, who knows, but at least the story is told. This is what it says:

You often hear about people with autism and the "quirks" they have - food can't touch each other or they won't wear certain colors, etc. As you go along everyday living with someone with autism, you'd think you could see these "quirks" immediately. But, you get so used to the routine and the way things are done and you really don't think about it. And then one day it hits you like a brick wall. Example - Scott makes Shane a sandwich - Shane refuses it. I think it's just because he prefers my sandwich over his Dad's sandwich. Scott cuts him up a hot dog - Shane refuses it. Once again I think he prefers the way I do it. Then one day I make him a sandwich - Shane refuses it. Hhmm.... What's the deal? He keeps telling me he wants a sandwich, but refuses it when I take it to him. Sandwich goes to the dog. Shane says, "Want some more sandwich!". That's when realization hits me right between the eyes. It's not the way the sandwich is made - it's how it's served. It can't be on a saucer, it has to be on the white plate with the stripes. I always put it on the white plate with the stripes - just not today. So, I make another sandwich, put it on the white plate with the stripes and everything is Perfect!
Posted by Lori at 11:19 AM