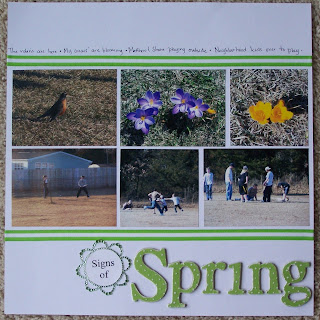 Oh my goodness, I just can't get my crap together when it comes to this blog. I do alright for a while, and then it gets totally neglected again. I finally got around to doing a layout for me today. I have been so busy trying to get Marilyn's albums of her grandson's birthdays done I haven't even looked at too many of my own pictures. I've been pretty good about taking my pictures during the week, it's just finding the time to make the layout about it. So, now I've skipped to week 9 (I still need to do week 6 and week 8 and I'll get there in time!) of my 52 week challenge. It's just a good thing I make up the rules as I go along! Week 9 is for the week of Feb. 26 - Mar 4. My crocus had finally started blooming and I was starting to see the robins make their way back and the weather was starting to get warm enough that the boys were going outside to play basketball and baseball and the neighborhood kids started coming over to join in on the fun. All sure signs that spring has arrived! I had originally planned on making this a 2 pager, but since I'm trying to keep my 52 week challenge layouts just single layouts I used 3x4 pictures instead of 4x6 and cut down the number I wanted to use. It's just a pretty plain and simple layout. I used white cardstock, ribbon and chipboard letters from Hobby Lobby, and a jewel flower from Kaiser Crafts. I embossed the green cardstock with the swiss dot embossing folder from Cuttlebug and then sanded the edges and the dots. It didn't turn out quite like what I wanted, but then they rarely do! Maybe I'll get caught up one of these days!
Posted by Lori at 6:03 PM