Hello everyone! Can you believe that today is December 1st?! This year has just flown right on by for me!

December 1st means we have a new sketch posted over at Sketch N Scrap today! This fun sketch is courtesy of Heather. 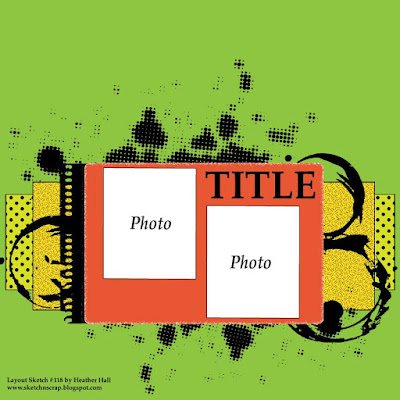 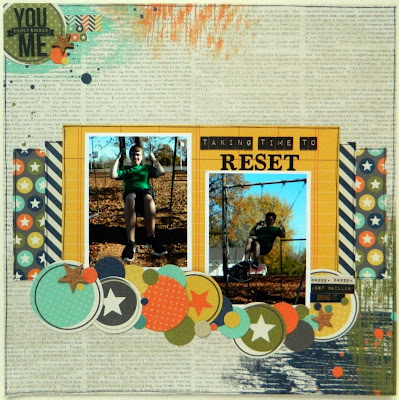 I know these photos are not the greatest, but this is a layout that is more about the story than it is the photos. (My journaling is quite lengthy, and will be hidden behind the photo panel.) I'll just hit the highlights about this layout, because otherwise we would be here all day.

This is my youngest son, Shane. Shane was diagnosed with autism at the age of 2. He has been going to school since he was 3. He will be 17 in January and he is a sophomore in high school. This school year has, by far, been the toughest yet. It has been a struggle since day one. There have been a lot of changes - both at the school and at home - and I just think it has been so overwhelming for Shane. Shane is nonverbal, so just asking him what is wrong is not an option. Everything with him is a guessing game, and sometimes you get it right, and sometimes you don't.

The change at home is Shane's one constant - his older brother, Matthew, went off to college this fall. Shane has never had to go to school alone, and I think he has a hard time trying to figure out what is going on, even now that we are almost half way through the school year. He tells me constantly, "Matthew, family pyramid" or "Who's here? It's Dad and Matthew". I have no idea where the "family pyramid" has come from, but I'm guessing Shane is thinking that a major part of our family pyramid isn't here as much anymore. The "Who's here" is because his Dad will usually pick Matthew up from college on Friday and they get home not long after I pick Shane up from school, so Shane is probably thinking - okay - isn't it time for Dad to go pick up Matthew yet?!

At school....where do I even begin...let's just say he is having to deal with two new teachers this year, and they are both sharing the same classroom, so at times there are a lot  of kids with special needs in one classroom. Shane also lost "his space" in the classroom, and I think it is all so overwhelming and he is on overload, so he is acting out at school. Just in November alone I was called twice to come pick him up because he was acting out. Things seem to be getting worse instead of better. Usually by this time in the school year Shane has settled in and is doing great.

Now for the reason behind this layout without going into too much more detail - on the 14th I got a call from his teacher saying I needed to pick him up. After talks with his teacher, and finding out the Spec. Ed. director was out of town for the week, we decided to keep Shane at home the rest of the week until we could figure something out and what was best for Shane. One day during that week we had a beautiful, 70 degree day, so I took him and Ada to a little park to run some energy off. I think Shane needed a little bit of time to take a break from all that was going on, and just reset.

The next week was Thanksgiving week, so he only had to go to school for two days. We had a meeting with his teachers and the spec ed director on that Monday, and hopefully have come up with a plan to make things work a little better, and be a little easier for Shane.

Does this mean everything is great and back to normal? Heck no. Anyone that has ever had any dealings with autism will know that even on its easiest of days, autism is hard . It is still a struggle, but all we can do is take it one day at a time. and take each day as it comes.

And if you have made it this far - thank you - even the edited version is a book! So, this is one of the stories that I want to remember, and if the photos aren't so great, that is fine with me. The story, in this case, is the most important thing.

Be sure to stop by Sketch N Scrap to see the beautiful layouts from the rest of the team.

Thanks so much for stopping by today! I hope you have a great day!